About two months of continued preparation were condensed into almost 3 days of intense work in the final assembly of our long-awaited final show. I am presenting 3 great pieces that work independently within the research concerning personal rituals, self-discovery and water, and together form narratives concerning cleansing, transformation, and coagulation (materialization), which are considered 3 properties of water.

Before delve into the assembly, the problems faced and the adjustments I made to accommodate my original ideas, I have to give my formal thanks to my beloved partner, Alexandre Szolnoky, who was by my side supporting me from the beginning of this process in every crazy idea that I had, always willing to help. I would not have achieved this quality work without him. Thank you, my love, thank you for sharing this path with me. 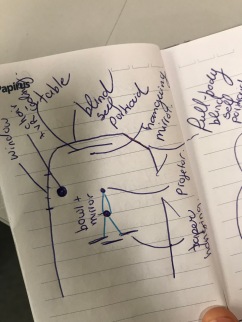 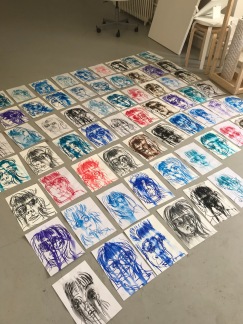 I knew that this would be the most difficult piece, as it is practically assembled in the place of the exhibition with adaptations imposed by the conditions of light and space. After bringing and setting up the whole structure in space I started working on the screen. At first, I wanted a wide surface to have more space for the image, so I hanged and mended 3 layers of paper. But soon I realized that due to the clarity of the room and the transparency of the paper I ended up losing a lot of light and the projection was weak. My first change then was to leave the width and project the image on a strip of paper with 2 layers, with one exactly over the other, making the surface less translucent and the image more powerful. Even with the less translucent paper the image on the back facing the room’s door still has reflections of light.

Another issue of this work was to find the right angle between the projector and the basin with the round mirror inside. The more open the angle of incidence of the projector’s light the more centered mirror the image projected on the paper would be, becoming powerful, but at the same time, it got smaller and more distorted. With the projector placed higher the image becomes smoother, but on the other hand, it gets bigger and less distorted, allowing the video to be more clear. After doing a lot of tests I opted for the second option, I think that the bigger projection has a subtle impact and I also think it is very important for people to identify the elements of the video (face, water, paint), even if I  had to give up the centralized image on the paper. Luckily the support I built was meant to bring me these options and possibilities for experimentation within the exhibition environment at the time of assembly.

After I got to that set-up, one of the things that kept bothering me was that some of the images were ‘leaking’ from the sides of the paper. I did several tests trying to find the perfect angle, until I talked to Ed and realized that I could never find a completely perfect angle, because in this installation I’m working with mirrors, water and elements that are unstable and this work is about it, this instability, fragility, that comes after cleaning. So I realized that the image leak on the ceiling actually complemented the installation, bringing this new layer of uncertainty.

I also made a few adjustments in the pump timing, reducing the interval between a gust of water and another, this made the image more agile and interesting. One of the most positive unexpected results of this assembly was the subtle effect of the projected over the mirror inside the basin.

My last big adjustment referred to the image that is being projected, I was having a bit of difficulty in present my entire face, so I made another edition with more abstract and closer face cuts. When testing this video inside the premises I realized that the image was lost and completely abstract, then I realized the importance of using my face in this work, it needs a human reference and relates with the blind self-portraits. So I resumed my initial image.

Due to the space and the organization of the real objects in the room I had to move a little the place destined to Virtual Reality. I still mounted it near the window, but not centralized so I could have more space to move inside the room and the pieces wouldn’t clash. I believe that I succeeded in the decision to attach the glasses and the mobile phone to the ceiling, this brought a better mobility to the viewer as well as solving the wire tangle problem that I had when I presented this work for the first time in the POP-UP Impromptu exhibition in March. Another good choice was regarding the swivel chair, it has added security for the viewers to explore the perceptions of the 360 video comfortably.

At first, I had thought about organizing this work with the table and all the drawings in the background. After trying these dynamics we realized that the space near the window was too restricted and small for the VR, so my first option was not to leave the table exactly in the middle of the wall but rather a little displaced. Talking to Jonathan, he suggested that I could put the table diagonally on a corner, opening the way for people to come closer to see the blind self-portraits and give more room for the VR. I liked this alternative very much because it not only presents a large white space in the background (which I will fill with drawings made throughout the exhibition) but also removed the Cartesian sense of “office” and authoritarianism that a table exactly in the back of the room can represent.

One of the biggest difficulties we had in this work was to hang the double-sided mirror with nylon thread in an effective way and that it would not slip. After many attempts, I believe we were effective. Each object presented at the table brings a great effective and narrative value, being part of the material that I use in the studio to make my drawings. In addition to the watercolors that Ale brought and traveled around the world, I present a bottle of water, traditional clothes sold in Brazil and ceramic objects made by me and used to dissolve the drawings with water. I present as a weight to the mirror a black tourmaline in the middle of the table, because this crystal has the property of cleaning environments and is part of my collection of crystals that accompany me from Brazil.

Exactly on the opposite wall, near the entrance door, I put the full body fluid portraits. I was very insecure in presenting these drawings, perhaps because it is a new research and they were very close to me. So, by talking to Jonathan, I chose to put them in a more careless way and overlapping each other, as if they were part of my studio and an ongoing research. They are on the side of the entrance door, but due to the initial highlight of the installation in the middle of the room, they are more noticeable at the exit, thus representing perhaps the future steps of this research and these pieces, giving a feeling of work in progress to the viewer. 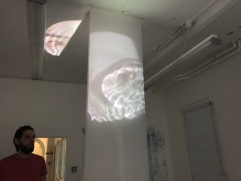 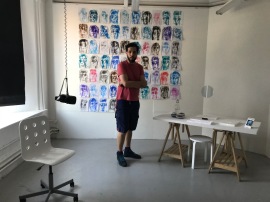 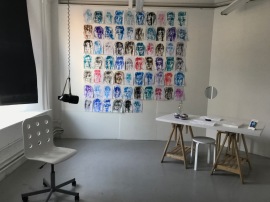 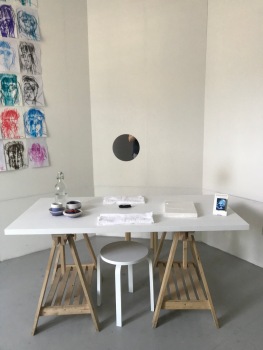